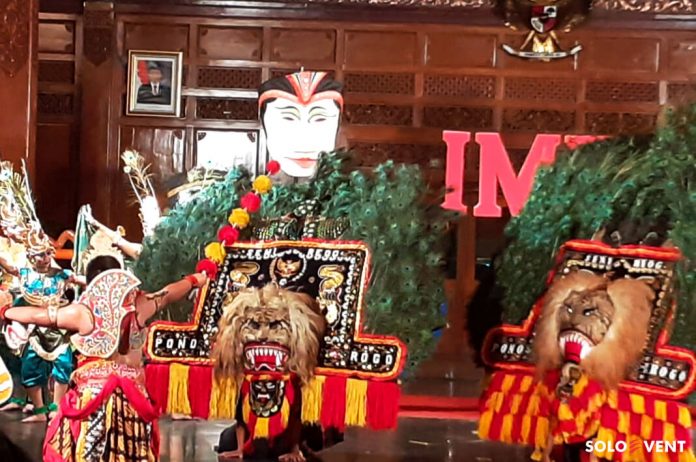 Soloevent.id – International Mask Festival (IMF) was rollout on Friday-Saturday (5-6/7/2019) in Pendhapi Gedhe, Solo City Hall. The theme was Soul of the Mask, which refers to masks as a form of expression of the human soul. Masks are art artifacts that have been known to humans since prehistoric times.

Chairman of the IMF Organizers 2019 R.Ay. Irawati Kusumorasri said that each mask has different expressions such as happy, sad, and angry. “The philosophy explores the power of togetherness in diversity. The IMF is expected to provide education about the appreciation of art for the community,” she said during a press conference at Pendhapi Gedhe, Solo City Hall on Thursday (07/04/2019).

The sixth edition enlivened by dozens of delegates from inside and outside the country. Each delegation performed different mask dances. The first day of the performance was from Semarak Candrakirana and Singo Yogo Solo which presented a dance about the establishment of the Singo Barong Kingdom in Alas Lodoyo. Then, the second appearance of the Purwa Kencana Studio in Cirebon performed the Losari Mask Dance. Next, the Bapangko Dance by Tedjo Dance Arek Wetanan dances about human self-expression. The last appearance was Independent Expression.